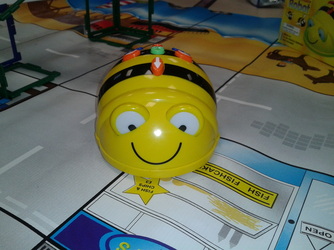 We have experimented with Bee-Bots on a number of occasions throughout the course so far.

We have used them in mathematics in order to make children aware of the number of movements that a bee-bot has to make to reach a given destination. This can be used as a fantastic interactive tool. Children could be given a series of destinations to reach as a team. This could be done as a race between teams.

We have also used them in the humanities. They could be used to promote the importance of map reading skills and also to improve on any existing knowledge. Liz B suggested that a large floor map of the local area could be made so that children can familiarise themselves with where they live. This could be used as a nice introductory tool to a larger map reading project such as an orienteering activity.

It is also a fantastic tool to promote a collaborative working environment, which is child-led in which all children can access the curriculum.